Who Burned the Forest?

Who Burned the Forest?

Perhaps you know me. My name is the Abraham Lincoln Tree, and I’m a giant sequoia who stands in the North Grove. Fire has always been part of the forest, and for most of my life I was not afraid of fire.

It may surprise you, but until the late 1800s, the forest where Calaveras Big Trees State Park stands today was open and park-like. Groups of tall trees alternated with sunlit meadows, lush with grasses and wildflowers. I enjoyed watching the deer, bears and squirrels forage easily through the forest. Ancestors of the Miwok and Washoe people walked past me without difficulty, and European Americans could gallop their horses freely between trees.

In those days, my forest was not a tangle of bushes, fallen logs, young pines, white firs, and dogwoods as you see it today. The dogwoods are lovely, but I miss the wildflowers that used to bloom everywhere.

My forest changed completely when regular fires stopped. Until the mid-1800s, small fires came through the neighborhood every few years. Wide corridors existed between clumps of trees because bushes and seedling trees were cleared out with each small fire.

You might ask, “Where did these regular fires come from?” Lightning started most of them, but people of the California Native American tribes set many as well. In spring and early summer, the people looked for little dry spots as they emerged – and set them on fire. These fires were small, patchy and low intensity, burning through debris and dry grass close to the ground. Like most of my neighbors, I have burn marks at the base of my trunk. When large fires burned up and into my bark, I was always able to repair the burn because giant sequoias are adapted to fires.

Over the centuries, I was never afraid when fires burned around me, but I grew very worried when many years passed without fire in my forest. I watched with great interest – and relief – when fire ecologists began to bring back fire in the 1970s. The South Grove benefited first, via small fires like those managed by the native people earlier in my life. Prescribed burns finally arrived in the North Grove area in the early 1980s. Small burns continued in various places through the 1990s, then paused for nine years. In 2019, burning began again, forming a boundary around my North Grove neighborhood. I feel more protected now and expect prescribed burns to start soon in the heart of the North Grove.

The recently burned areas are already more open and park-like with much less undergrowth. Hopefully, the animals and wildflowers from my past will return soon. My fellow giant sequoias and I are excited that the park is burning again. Fire has always been part of my life and is essential to my survival. I’m forever grateful to humans of the “fire cult” who had the foresight and persistence to return fire to the park.

Meet you in the forest,
Abraham Lincoln Tree 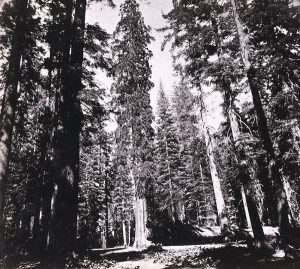 ﻿Photo courtesy of The Society of California Pioneers 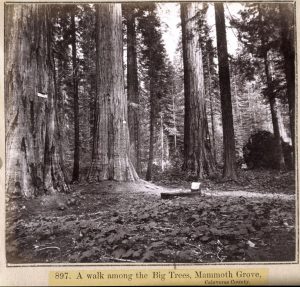 Photo courtesy of The Society of California Pioneers