Hello. I’m a magnificent dogwood tree, and I’m just starting to bloom! Come on up to the park, and you’ll find me along the North Grove trail. 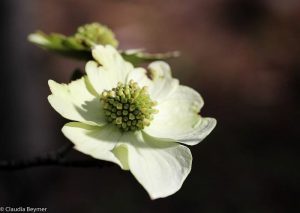 I don’t know why giant sequoias get all the glory here at the park, because I’m far flashier and four-seasons showy! I create dazzling white blooms in April and May, then wrap myself in lovely green all summer. In the fall, my leaves glow a spectacular red and pink, and my vibrant red berries attract winter birds.

The big flower show has begun, so let me explain. My fancy white petals are actually bracts that start out green and fade to white. I use them to attract pollinators to my real flowers – the tiny blossoms are clustered in the center. Once pollinated, I’ll create berries (also called drupes) which carry one seed each. Birds and squirrels love to eat my berries, which is just fine with me. My seeds are designed to germinate after they have “passed through” an animal. It’s a great way to send my offspring out into the world. People can help my seeds germinate by nicking the outer coating with a small, sharp knife or soaking them in water for a few days. (Never try to dig up a dogwood seedling from the forest to move to your garden, because it’s illegal and we don’t transplant well.)

The North Grove is crowded with many of my fellow dogwoods, and not everyone is happy about it. Regular fires used to keep our population low, but the fires stopped long before I was a seedling. About nine years ago, park staff decided to thin out the dogwoods and chopped down 90% of us. Ha. We just laughed, because our roots were still alive, and my fellow dogwoods just grew back as dense bushes. It will take more than a chainsaw to keep us down! 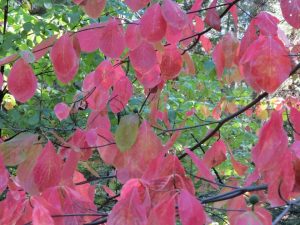 We dogwoods are famously beautiful. In 2012, we starred in “dogwood diplomacy” with Japan. A century after Japan sent 3,000 flowering cherry trees to the U.S., President Obama presented Japan with 3,000 specially bred dogwoods. It was a proud moment indeed. We were also beloved by other presidents: George Washington and Thomas Jefferson both planted us at their plantations.

Don’t think of me as just a pretty tree, however, because I’m also famously useful. My wood has been used for golf clubs, and my bark has been used as medicine for pain, fevers, muscle inflammation, pneumonia and more. During the Civil War, my bark was used to treat soldiers with malaria. The California Native American tribes used my branches for arrows, because my wood is extremely hard and doesn’t splinter. Early American settlers used my wood for daggers, and the textile industry on the East Coast nearly decimated the dogwood population by cutting us down to make weaving shuttles.

I believe that all dogwoods hold a special place in the hearts of those who loves trees. Next time you come to the park, you can self-address a postcard that staff will send to you when the dogwoods begin to bloom! I hope you come to visit us soon.

Greetings from the North Grove