Have you visited the Warming Hut?

Have you visited the Warming Hut? 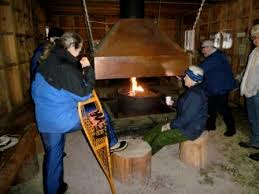 The Warming Hut can be a blast – lots of fun for Docents and visitors.

Of course it can be a little less fun and quite a bit of work when four docents, Sanders LaMont, Alice Williams, Paul Prescott and Lauren Scott served 898 visitors over four hours during Christmas week. That’s over 200 servings of hot cocoa or hot cider per hour or 3 servings per minute. But it’s still a hoot, particularly if you don’t mind not talking to visitors from around the world and being coated with brown powder!

Families love the WH! Countless families tell us how much they appreciate a complimentary hot drink after trekking along the North Grove Trail on a cold snowy day. And the fire pit. They love our roaring fire with logs to sit on around it. We do ask for donations and the WH generates $2,000-$3,000 every year which stays in our park and mostly goes to youth interpretive programs.

We have a rack of snowshoes that we loan at no cost for guided tours when there is snow. Many families have been thrilled by their first experience snowshoeing.

Joan & I were working in the WH a couple of years ago on a cold, miserable day. Very few visitors. Two men came in, both in their sixties. They sat next to the fire and we asked them where they were from (we have maps on the wall and ask visitors to put a pin in wherever they’re from). The two men told us they were brothers but had just met each other for the first time the previous weekend. For the next 1 ½ hours they told each other their life stories by telling them to Joan & me. Their family fled Nazi Germany and the infant brother was somehow lost going thru immigration in Venezuela. The mother told her daughter about the missing brother on her death bed and the daughter located the missing brother and got them together. A truly memorable day at the WH!

And then there was Jan 8th, 2017.  Miserably cold rainy, windy, snowy, sleety day with water running down the NG Trail. Kathy Enea & I counted 30 visitors that day. Maybe 10 people said they were going to hike the NG Trail and every one of them came back after a few minutes, none of them making it to the Big Stump. A couple of well-equipped Forest Service dudes (I’m pretty sure Kathy called them hunks) did complete the trail. While they were on the trail Kathy asked if I’d just heard and felt a tree falling. I didn’t. When they returned to the WH the Forest Service guys told us a couple trees had toppled, that they were big tress and blocking the NG Trail. We learned a couple of hours later that Kathy had heard and felt the Pioneer Cabin Tree falling.

Volunteering at the Warming Hut is one of those truly satisfying and mostly fun activities at the park.  If you are interested in becoming a docent at Calaveras Big Trees State Park, please contact Devin Swartwood at 209.795.7980.