Perhaps you know me. My name is the Sentinel Tree and I’m a giant sequoia who   stands at the edge of the North Grove gazing down on the Big Stump. (For over    1,000 years, I stood beside a second Sentinel Tree, but my brother fell over in 1919.)

Over 160 years ago, we witnessed a terrible crime that eventually brought peace and protection to the forest. This is my story.

Long before the park was created, humans stripped the bark from two giant sequoias. The trees were literally skinned alive to reassemble later for people to gawk at. They did it first in 1853 and again in 1854. Why? It was all about making money.

The Discovery Tree was the first to die because it was the largest of us all. Five men swarmed the tree, cutting off 50 feet of bark in ten-foot-high sections. Then the   men spent 22 days cutting down this magnificent tree. They used long-handled pump augers to drill holes into the center of the tree from all sides, because there was no saw long enough for their hideous work. The Discovery Tree finally fell with a sad and mighty crash. Then the vandals danced on the stump and turned the fallen trunk into a bowling alley.

The trees were horrified, grieving, and fearful, but we were not alone. Humans too were horrified and alarmed. John Muir and other great men spoke in our defense.

Humans turned their outrage into action and worked for decades to save giant   sequoias from destruction. By 1931, the North Grove of Calaveras Big Trees became a state park. (The South Grove was added to in the park much later, but that’s a story for another day.) 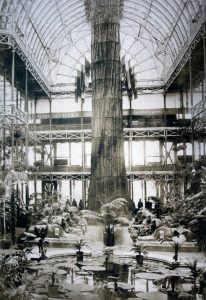 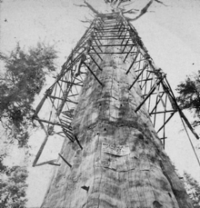 I’ve seen my share of tragedies, but my grief has been erased by the beautiful partnership that emerged with humans. Today, I’m thriving and content because humans have stood with us and protected us. Our community endures, and we welcome the humans who come to wander among us, gaze up, and leave refreshed. It brings me joy to say that trees and humans truly need each other.

Meet you in the forest,