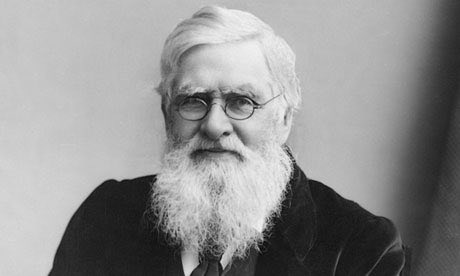 This book is the until-now untold story of the 1887 visit to California of one of the most famous men of science in the world, the man who had conceptualized around the same time as Darwin the “survival of the fittest” cornerstone of natural selection, the lynch-pin for the theory of evolution. The book chronicles Wallace during his stay, from his visits to the natural wonders of Yosemite and the Calaveras Big Trees to his meetings with the state’s most eminent scientists and pivotal figures such as conservationist John Muir and politician and businessman Leland Stanford. What Wallace did and said in California connected him to a bewildering and sometimes bemusing range of people and subjects, from environmentalism to the beginnings of Stanford University; from the Calaveras Skull and one of the greatest hoaxes in natural history to Spiritualism and its colorful frauds. His American journey was the first and only speaking tour in his lifetime.

Nowhere in America did Wallace immerse himself in nature as completely and nowhere were there cathedrals of nature he wanted most to worship at than those in California. Nowhere was his personal connection stronger than in California as well and the story of his ’49er brother John is integral to understanding Alfred’s time in California (the town of Wallace in Calaveras County is named for John!). The branches of “Glorious Trees: Alfred Russel Wallace in California” extend as far and as wide as those of the Sequoias Wallace so admired.  “Glorious Trees” contributes an until-now unexamined portion of his life to the biography of one of the most fascinating men in the history of science.

Seminars are free and open to the public. There is a day-use fee to enter the Park. Pack a lunch, bring the family and plan on spending the day among the Giant Sequoias. For more information call Calaveras Big Trees Association at (209)795-1196.