Calaveras Big Trees Association’s Board voted unanimously last week to call for the Department of Parks and Recreation to take immediate, urgent action to mobilize cavalry of forest crews to clean up the massive build-up of dense, dry vegetation … now, during the winter months.  The entire 6500-acre Park is in dire condition given the apocalyptic mega fires of today.

Without fuels treatment we believe we will likely be the next Big Basin.

Basically, we are asking for resources to enable the Park to do more in five months than they currently plan to do in five years.

“As a result of decades of fire suppression followed by limited periodic controlled burning, there has been an excessive, unnatural accumulation of fuel over the years,” said Dr. Vida Kenk, President of our Association. “It will surely devastate our precious giant sequoia groves in a catastrophic fire.” We’ll be sure to update you on the state’s response to our urgent call for action NOW before a catastrophic wildfire.

We appreciate your support in preserving and protecting our precious giant sequoias.  Calaveras Big Trees State Park is unique – it is the only state park in California that protects giant sequoias.

The Association feels the need to speak for the trees. 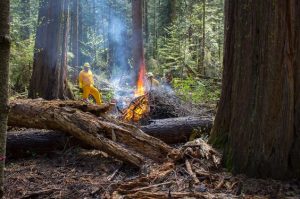 As crews conduct a “pile burn”, the dire condition of the Park is evident by the density of dead,
combustible fuels on the ground and dense overgrowth – a landscape primed for fire by the warming climate.
The Association has called for the state to urgently bring in “a cavalry of forest crews” this winter to reduce
the massive build-up of fuels that “will surely devastate our giant sequoia groves in a catastrophic fire.”   (photo by Alan Beymer) 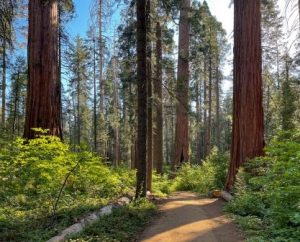 In this photo, if you look closely, you will see highly flammable dead trees still standing, large clusters of “ladder trees”
that can catapult fire into the crowns of giant sequoias and should be thinned and fallen tree trunks that need to be removed.
It also illustrates the dense understory.   (photo by Claudia Beymer)

Below are links to very interesting videos and a webinar that are worth your time to view.

From The Nature Conservancy:

“Why We Work with Fire”

The Webinar addresses the KNP Complex Fire that burned 88,000 acres and killed approximately 3-5% of the world’s population of mature giant sequoias. The SQF Fire in 2020 killed 10-14% of the giant sequoia population.