I’ve always been obsessed with our Park’s history!  I wanted to know who wandered the North Grove of Sequoias or rode horses, crossing the Stanislaus to get to the South Grove.   What did the cottage look like next to the stump?  I used to wonder if there was anyone still alive who had spent time in the old Mammoth Grove Hotel, currently our parking lot.  Imagine my surprise when I learned of 97 year old Earl Walsh, lifetime resident of Angels Camp, who spent his teenage years working at the old hotel!   Before I knew it I was conducting my first oral interview with this wonderful, interesting man.  The interview was the beginning of CBTA’s History Project, an idea suggested by Rod Smith, president of CBTA. 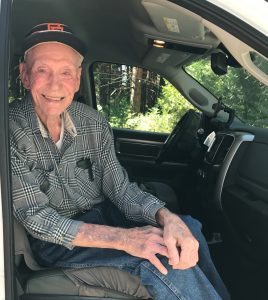 Earl Walsh was born on December 31, 1919 and is now 99 years old.  He tells stories of living through the depression, helping Elizabeth Whiteside at the Big Trees Hotel and later, becoming a bombardier pilot during WW2 and the Korean War.  Today, at his home in Angels Camp, he displays his commendation medals with pride.  His life is full with children, grandchildren and great-grandchildren and they all call him papa.  Earl was 12 when he and his younger brother, Rolly began working their summers at the Park.  Earl’s grandmother cooked for Elizabeth Whiteside at the hotel and Earl kept busy with any chore that was needed, including shoveling snow into the icehouse behind the hotel.  Earl said that this was his first chore each season because all perishables were kept here.  When I asked him about Mrs. Whiteside making homemade ice cream his eyes lit up and said “of course”!   His favorite story involved taking a group of guests on a North Grove moonlight hike, using one flashlight.  His younger brother, Rolly brought up the rear as the group filed through Father of the Forest.   The flashlight suddenly turned off and as Earl frantically turned it back on a huge bear appeared in front of the group.  Earl was laughing with glee as he described the guests running in all directions.  He eventually regrouped and guided everyone back to the hotel.  I asked what Mrs. Whiteside had to say about it and he told me that she had gone to bed!   Earl had so many wonderful stories to tell but I think my favorite involved his adventures of riding horseback to the South Grove, crossing over the Stanislaus River and Beaver Creek on sketchy bridges, delivering supplies to the caretaker who lived in a South Grove cabin.  On one occasion his horse was spooked by a rattlesnake and refused to cross over the river.  After young Earl killed the snake, he helped his frightened horse over the bridge.  Earl smiled largely and exclaimed, “those were really fun days.”

The History Project Committee continues oral interviews with people that have a history with the park.  We currently have completed interviews available in our docent library.  Looking ahead the History Committee has planned Discovery Day (1852 – 1900) at the park on July 20.  Docents will share historical facts and fun trivia from historically significant points in the park.  It should be a very special day and we look forward to seeing all of you!