As Roomy as a Cabin: The Smith Cabin Tree

As Roomy as a Cabin: The Smith Cabin Tree

Hello. Perhaps you’ve heard of me. My name is the Smith Cabin Tree and I’m one of the 1,000 giant sequoias in the South Grove. I’m the second largest giant sequoia in the area, and only the Agassiz Tree is larger. I’m not marked by any sign and no trail comes my way.

I earned my name, the Smith Cabin Tree, because I was once the home for a human called “Trapper” Smith. 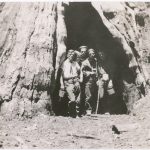 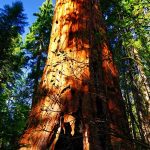 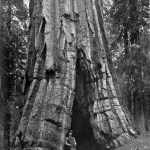 Over the centuries, I survived a series of fires that burned out a huge hollow at my base. Smith found my charred, burn-out hollow to be as snug as any cabin and we lived together for about three years. My hollow (his cabin) was a roomy 21 by 16 feet, and he even had enough space to bring his horse inside during stormy weather. He lived in my hollow and left each day to work as a guide, handyman and angler for the Big Trees Hotel.

We lived together through all kinds of weather until December 1861 when we both nearly died on a wild and stormy night. Trees crashed around us and branches whirled to the ground. I creaked and trembled in the wind while Smith cowered in terror. Smith dared not venture outside. Finally, the winds toppled a neighboring giant sequoia, Old Goliath, with an earth-trembling crash.

Smith left after that night and never returned. I lived alone again until the 1930s when another human moved in temporarily. Dan Phillips, a Fireguard for the U.S. Forest Service, lived in my hollow while his cabin was being built nearby.

I’m not the only giant sequoia in the South Grove massive enough to house humans or other living creatures. The cavity at the base of the Cyclops Tree is large enough to admit eighteen horses. During a severe winter one year, 16 cattle took shelter within the Tree of Refuge. Horsemen once rode three abreast for almost 100 feet through the fallen, hollow log of the tree called Noah’s Ark.

In the past 80 years, I’ve seen humans only occasionally. The quiet of my forest is marked only by the cawing of ravens, the tread of the occasional bear and the chirrup of chickarees as they dart to and fro. Old Goliath and I are still together. I am standing while Old Goliath lies on the forest floor where he fell more than 150 years ago, hardly aged at all. It reminds me daily how close Smith and I came to perishing in that storm.

Greetings from the South Grove,